Szalagtöredék - with the sceene of the Annunciation

From the second half of the 15th century onwards Florentine textiles with figures - usually depicting scenes from the New Testament, and from the lives of Christ and Mary - were used for the decoration of chasubles. On these pieces, the scenes are repeated cither horizontally or vertically, sometimes composed in a special pattern.

The Annunciation is a fragment of a series of scenes repeated horizontally. Mary, half sitting, half kneeling in front of a bed with curtains, receives the angel, who is bending on one knee before her. The Holy Spirit appears above the angel, in the shape of a dove. Ruth Grönwoldt describes four variants of Florentine cloths depicting, "The Annunciation". Three of the four variants show Mary and the angel in the open air, whereas the fourth, like the one, here exhibited is indoors.

No analogues have yet been discovered. However, the variants can be found in all the great collections of textiles, such as the Budapest Museum of Applied Arts (Inv. Nos. 8110,14899), the Cologne Kunstgewerbe Museum, in the Prato Museo del Tressuto and the collection of the Civiche Raccolte D' Arte Applicata in Milan. 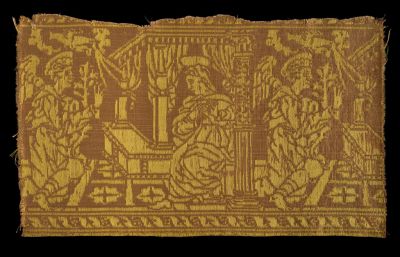