This c. 1650 prayer book bound in a silver cover is evidence of the survival of common, widely-known iconographic compositions in metal art in the period following the Renaissance. The figure of the Man of Sorrows adorning the binding is based on a woodcut by Albrecht Durer (1471–1528). The depiction on the front cover copies the composition on the title page of the woodcut series issued under the title "Small Passion". The back cover shows “David playing the harp”, influenced by the engraving of Jan Sadeler (1550–1600), who worked in South Germany.

The editor of the prayer book (Andächtige Versöhnung mit Gott. Nürnberg, 1645), Joshua Wegelin, was an Evangelical minister in Pozsony (today Bratislava, Slovakia), who was active from 1635 to 1640. 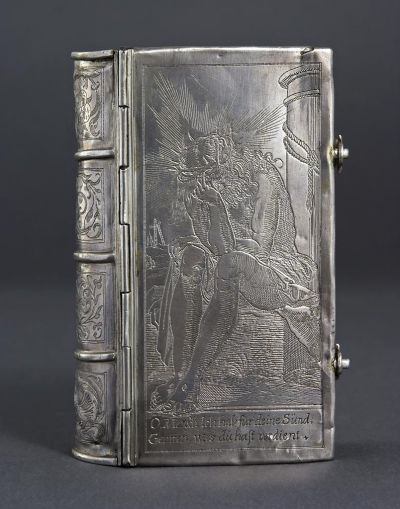