The four curved legs are joined by diagonal stretchers. The middle and the sides of the seat rail are carved with volutes. The seat is trapezoid. The diagonal stretchers are continued in the frame of the back, which is tapering, rounded at the top. The leather back support is decorated with strongly stylized foliage, typical of Parisian Art Nouveau, The chair belongs to a dining room suite that won gold medal at the Paris International Exhibition. The suite - a cupboard, a table and chairs - was exhibited by the Art Nouveau company of Siegfried Bing, a well-known art collector and dealer, in one of his seven pavilions «in a hidden-away part of the esplanade» of the International Exhibition.

In the years around 1900, significant Parisian artists, and foreign artists active in the French capital, came together at the gallery known as the Maison de l’Art Nouveau belonging to Siegfried Bing (1838–1905). Bing distributed the works of artists working in the new taste, including those of Georges de Feure (1868–1943), Eugene Gaillard (1862–1933) and Edouard Colonna (1862–1948). Alongside their commitment to the new, these artists also undertook the renewal of old French handicrafts serving display needs. In Bing’s workshop a few model rooms were made for the Paris World’s Fair also, at which organic, naturalistic furniture sometimes recalling rococo forms enjoyed huge success. The facade of the Bing pavilion at the world’s fair and its interior embellishments were designed by Georges de Feure. There he exhibited his entire set of livingroom or dressing-room furniture consisting of a salon cabinet, a toilette table, a sofa, and chairs with and without arms. One chair without arms was purchased by Jenő Radisics (1856–1917), the director-general of the Museum of Applied Arts. Built together with the seat surface of the chair, the upholstered back is decorated with four roses in four different shades of grey in a symmetrical arrangement. The same rose figures appear on the upholstery of the sofa and of the chairs with arms. In Bing’s other pavilion, ‘in a hidden corner of the esplanade’ of the world’s fair, was placed Gaillard’s dining-room, which won a gold medal. The suite consisted of a sideboard, table and chairs. One of the chairs likewise entered the collection of the Museum of Applied Arts, in 1900, as a purchase made by Jenő Radisics. 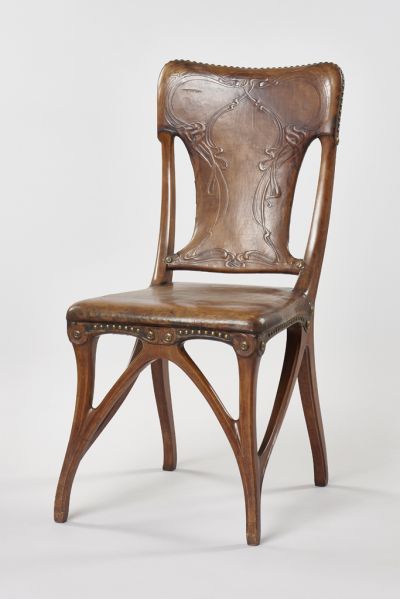