The border has a continuous pattern of an undulating stalk with carnations, daisies, daffodils and peonies, repeated four times on the long sides and twice on the short sides. On the short sides, there is also a tulip head opening from curved leaves and, beside the corners, a tulip on its side with a curved stem. In each corner, pomegranate branches arc out of a heart-shaped scroll. The corner design within the border comprises a symmetric flower bush growing out of a heart with pomegranates, tulips and, on the central stem, two kinds of rosette. Nothing similar is known of in Hungarian embroidery.

Textile application embroidery (appliqué work) was very widespread in Spain in the 16th century and was common throughout Europe in the 18th but like needle dyeing, applied silks were dyed. This technique was also known in the East – in the decoration of Turkish tents, for example. This piece of embroidery, however, stands apart from all of these. Its motifs retain much from the Renaissance: the heart-shaped scroll with a little flower stem growing into it, tulips growing among curved leaves, and flower bushes extending out of hearts or stylised vases. It appears all the more alien because the formerly crimson silk application has faded to ochre, so that the strong outlines make what is a very regular pattern hard, like an etching. The pattern of the table cover, principally the flower bushes, finds its closest relatives in Austrian and German embroidery. 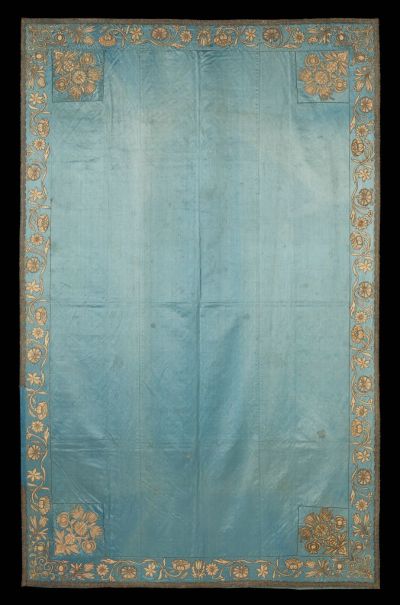