The two covers of this double compartment snuff box open in the opposite directions they are attached to the body with hinges. The body is divided into two parts in the middle. The cylindrical body stands on an oval base its sides are raised. Its entire surface is covered with grisaille scenes, that is, enamel paintings made with various shades of gray on a white base. There is no direct connection between the various mythological scenes. The outside of its lid features the one-hundred-eye Argus, who on behalf of the jealous goddess Hera guards the love of Zeus, Io, turned into a cow. Argus is alluded to by the peacock, whose feathers are decorated with his “eyes”. In the inside of the cover there is a picture of a town – a church, a bastion, and single-storied houses. On the exterior of the bottom lid there is a young hero with a dragon killed by arrows in the inside is a scene of a town surrounded by a wall strengthened with bastions and gates, a two-tower cathedral, one-storied and larger buildings. On the sides of the box the illustrations of Cato stabbing himself with his sword and Aeneas fleeing from burning Troy, carrying his father, the old, paralysed Anchises can be seen.
Sniffing fine-ground tobacco, snuff, to induce sneezing was a fashionable passion of noblemen in the 18th century. An entire ordinance was built around it with the use of various boxes. Since the powder had various scents due to the added materials (like mother-of-pearl, rose, cinnamon, lavender, marjoram etc.), the various compartments of the boxes made their storage possible. 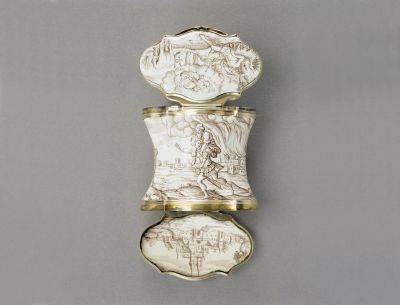