Almost every country in Europe has its own name for the ‘dawn of the twentieth century’ style. In French it is art nouveau, which derives from the fact that in Paris the followers of the new art grouped themselves around the Maison de l’Art Nouveau shop at 22, rue de Provence belonging to Siegfried Bing (1838–1905). A leading French figure in this stylistic trend was the architect, interior designer and furniture designer Charles Plumet (1861–1928), the chief architect of the 1900 Paris World’s Fair. Together with Tony Selmersheim (1840–1916), he had a shop in Paris both men were members of the Six, a group of artists in the French capital. Their furniture was made of non-veneered wood with a waxed surface. The emphasis was on structure and lines. Plumet’s dressing table first appeared in the British periodical The Studio. It was made in many examples: we can meet with this type of toilette table in the applied arts museums of Berlin and Hamburg. In the lower part of the piece, which rests on fluted legs that bend outwards, there are three drawers. In small recesses in the long top, which is shaped like a fingerbiscuit, containers for different toiletries can be safely stored. Perhaps the most beautiful aspect is the triptych-like upper part with its three mirrors. The drawerpulls are embellished with stylised creeper. Embroidered flowers embellish the upholstery of the seat of the chair belonging to the dressing table. The curved, openwork back of the chair is articulated by three struts. 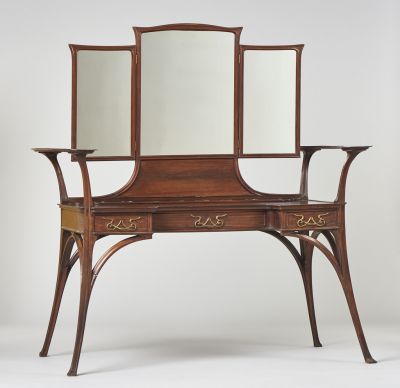