The newer box of the toilette set is covered with black silk on the outside and lined with deerskin on the inside. The mirror is fixed to top of the box, with a wooden back plate. Its frame is jointed, bent and symmetrical. The bottom and top part of the frame show an oval field in a chased cartouche, surrounded by leaves and flowers. The bottom cartouche shows the M A initials written in one word, in cursives. The set consists of a water jug, a wash bowl, two candlesticks, a portable candlestick, five small bowls, a hand-glass, two flasks and a so-called pared glass, coloured white and blue, a brush casket, a comb box, a soapbox, a hairpin box, a toothbrush, a brush, two nail brushes, a round brush, a pincushion, a snuffer and two powder boxes. They are decorated in the same way, with chased Neo-Baroque motifs.

The set was made for the wife of Sándor Nikolics, Sr., née Ágnes Hodonyi Manaszy, whose portrait - painted by Miklós Barabás in 1858 - can be found in the Hungarian National Gallery. 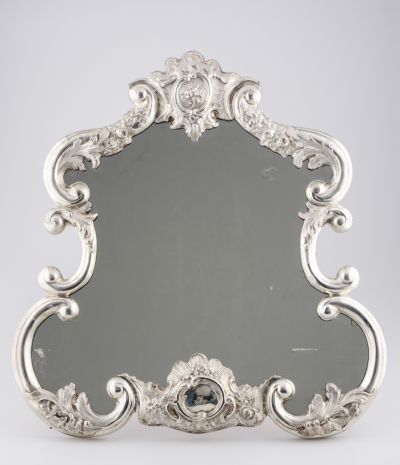