The domed, rectangular, white marble plate stands on an ormolu plinth forming four stylized acanthus leaves, decorated with foliage and rocaille motifs. The horn of plenty vase is faceted into nine sides it is placed in an ormolu setting that forms a swan bending its head to the chest. The edges and the splaying, lobed rim, as well as the banck beneath the top rim are layered with cobalt glass. The nine faceted plates are gilt with Rococo ornaments, rocailles and foliage.

The piece was identified by Mrs. Klára Tasnádi-Marik as made in a Russian glass factory. She supported her hypothesis with the evidence of the bronze and marble parts of the plinth: they are, rather unusually, fixed with wooden insets under the iron screw. It is indeed possible that the setting was made in Russia the glass body, however, was without doubt made in Europe, in the Baccarat Glass Factory. This company was producing a great number of horn-of-plenty vases in the nineteenth century (while others made only one or two scattered pieces). An analogous piece of faceted, colourless, transparent glass, with ormolu and marble plinth, set in a bronze animal head can be found in the Kunstgewerbemuseum of Cologne this was made in the Baccarat factory, around 1850. (see H. Newman: An Illustrated Dictionary of Glass. London, 1977 p.79.) The style of decoration and the technique of the vases are also related to the products made in the Baccarat factory in the middle of the nineteenth century. 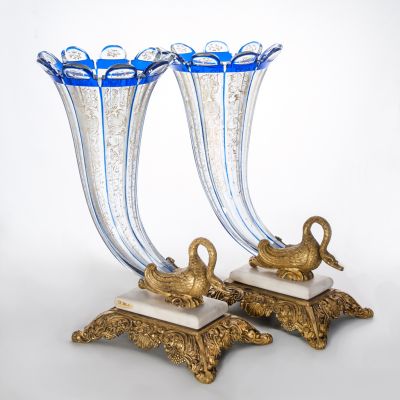