Grand vase - with chinoiserie painting; fenland with cranes and lotuses

This ornamental vase, special and remarkable both because of its size and its ornaments, was presented by Ignác Fischer at the 1885 Hungarian National Exhibition he donated it to the Museum of Applied Arts at the 25th anniversary of his ceramics work. The fashion of the similar sized grand vases made during the period of the revival styles was followed in all the European ceramics and porcelain factories. The items – in most cases made in pairs or in sets – were mostly ordered or purchased for the decoration of reception halls and state salons. The entire surface of the giant vase is decorated with chinoiserie fenland scenes cranes, lotuses, blossoming cherry trees and titmouse pairs. The side of the base and its neck feature stylised chrysanthemum ornaments. The painting is especially detailed several painting techniques are applied on it by Fischer: underglaze cobalt painting, overglaze enamel painting and gold. 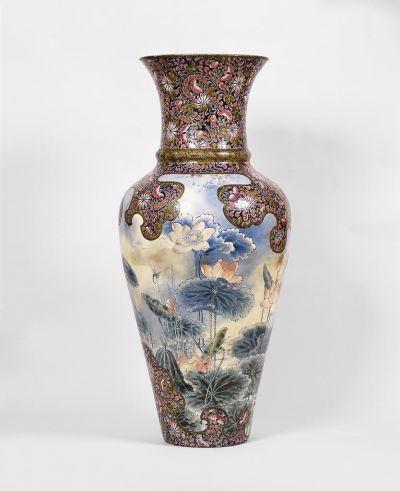