Ade Mathilde was an illustrator and ex libris artist of Hungarian origin, living in Munich. She made alsmost two hundred ex libris, and was mainly nown for her happy, humorous pages. Kálmán Rozsnyay (1872-1948), a writer, actor and graphic designer married Kornélia Prielle, who previously was the ideal of Sándor Petőfi, the most famous Hungarian poet, and was at the time of the marriage, in 1905, already 79 years old. Mrs. Rozsnyay died in 1906. This nostalgic ex libris was made during their short marriage, recalling the Biedermeier bourgeois idyll of the first half of the nineteenth century, the young years of the actress. This special piece is an artistic documentation of Biedermeir nostalgia and sentimentalism at the turn of the century. 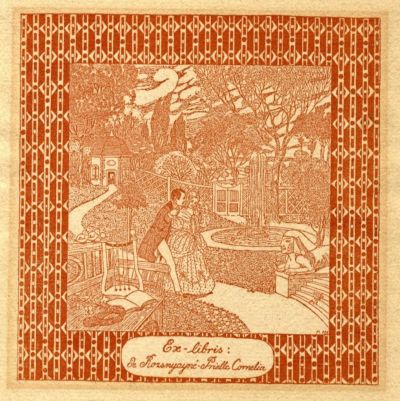