Desk - part of the furnishing of a gentleman's room

The desk stands on eight ball feet both of its longer sides are identical. There is a door to the right and left, with engraved motifs on the massive door panel. Behind the doors, on both sides, there are three English-type drawers. Above the doors and right under the top are two narrow drawers on the sides and a broad one in the middle. The front legs of the armchair are cylindrical while the back ones are slightly curved, prismatic. The wooden frame of the seat is rectangular. The back support is straight, with a rectangular, upholstered arm support and turned ornaments at its top.

Shelf: (in the receipt No. Kit 435 it was mentioned as a "wall étagere"): four consoles support the shelf that end in a baluster rail on both sides. The back under the shelf is engraved. Log basket the hut-shaped basket rests on four bun feet. The sides and the roofs are decorated with zigzag and parallel lines. The basket has two stirrup handles.

Wardrobe: ("a gentleman's wardrobe, with mirror"): the wardrobe stands on four ball feet. It has a drawer in the bottom, with two stirrup handles. The front is divided in the middle to the right there is a door with a mirror, to the left there are two drawers and a little compartment that can be closed with a square door. The left to is open, equipped with a shelf and framed by railing. The pierced and carved top corniche is enriched with balusters on the corners.

The wash stand stands on four bun feet, forming a lying basket with an asymmetrical structure: there is a drawer in the middle, a door imitation a drawer to the right and a curved, open compartment to the left. Between them there is a gap. The front is decorated with homogeneous, engraved and carved motifs. The top is marble, equipped with a back and a shelf.
Table: the so-called "sultan table "stands on four turned and scanted legs, joint by and X-shaped stretcher. The octagonal top has a set-in rouge-royal marble.

Bookshelf: three rectangular selves rest above each other, on four turned, cylindrical feet. The edges of the shelves are lined with profiled laths. The junctures of the shelves and the stand are emphasized by carved rosettes.

There are two receipts about the furniture, both from Endre Thék, in the archives of the Budapest Museum of Applied Arts (Kit 435-436). One of them states that the "gentleman's furniture in English style" was made for Mr. Károly Lechner, a doctor and also the brother of Ödön Lechner. The furniture was delivered in two parts most pieces were received and appeared on the receipt of September 14th, 1888, while the "wall étagere" and the log basket were delivered later, on March 13th, 1890. The last two pieces were probably bought when Károly Lechner was promoted to be the leader of the psychiatry, neurology and court psychology department of the Kolozsvár University, Both receipts were sent from "Endre Thék's Artisan Furniture and Wooden Products Factory", which was operating in the eighth district of Budapest, under 66 Üllői street. 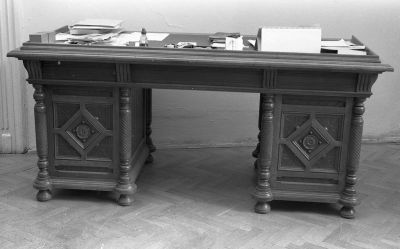