Claret dish with lid and plate

The surface of the saucer plate is slightly concave and wider than the foot rim of the claret dish. The broad rim is also concave, decorated with geometrical patterns of eight circles and stylised leaf motifs, enframed by incised lines. The base is greenish yellow, the circles are «Berlin blue», while the motifs in between are coloured dull green and white. The rising rim is brown, with black contours. The claret dish stands on a round, curved foot, and is divided into three parts by embossed, brown stripes. The bottom, bulging part shows embossed, yellowish green circles and curves, repeated four times all round the body, enframed by black lines. The base is again dull green, just like on the foot. The narrowing, cylindrical middle part is placed at the height of the two thick, upcurving handles, with the richest decoration: a refined, detailed relief scene appears on both sides of the dish, placed in flat semicircles, among geometrical, stylised plant motifs. The style of the panolith reliefs is mostly historicizing. They were probably made by Jean Baptiste Stahl (1860- 1932), although they are not marked. On one side a group of six people is pictured, amusing themselves. A man on the left sits on a chair and dips his spoon in a similar dish, while his mate is playing the mandolin. The other side shows a group of seven people, greeting Bacchus who sits on a drum, playing the bagpipes and carrying a large bottle in a basket. The costumes of the figures recalls the 17 th century. The top part of the claret dish is plain, dull green. The lid is decorated with a geometric pattern of greenish yellow, ray-like ribs, surmounted by a four- pointed, blue band. There is a round indentation at the juncture, surmounted by the plain, curved finial. 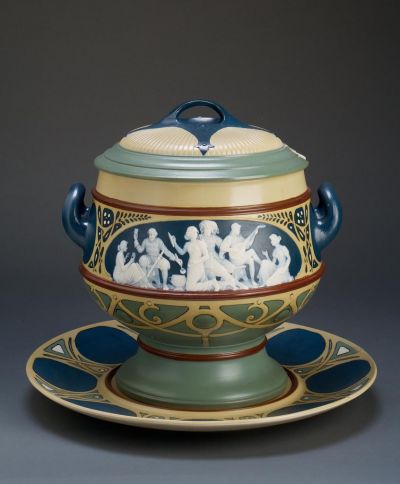