The series originally consisted of 20 parts ordered by Pope Leo X of the Medicis, for the Constantino Hall of the Vatican Palace. Each part is decorated with emblems of the Medici family. Opinions differ as to the identity of the artist who made the original cartoons they were probably the work of Tommaso Vincidor and Giovanni da Udine, using the sketches of their master Raphael. The series was woven in the Brussels workshop of Pieter van Aelst, however, he died before the tapestry richly woven with gold was completed. It was transported to the Vatican only after the death of Leo X, there it remained apparently until 1790 after that date there is no information about the fate of the works. The subject "children at play" was a popular one in both Renaissance and Baroque art.

The first person to concern himself with the story of the series was Müntz. He could reconstruct all the 20 pieces from inventories, contemporary and later sketches and engravings. As far as we know at present, the four tapestries in the Budapest Museum of Applied Arts are probably the only remnants of a series, woven without golden threads, made after the original cartoons. Experts, however, do not agree on the place and time of the execution of the copies. For a precise definition further research is required. (In 1994 two further tapestries of the set turned up through art trade – it can presently be seen in the Metropolitan Museum of New York - see here and here). On the four tapestries are putti playing in front of a rich cluster of fruits intertwined with ribbons. One has an ostrich in the middle. On the second is a putto holding a yoke (the emblem of Pope Leo X) in its hand. On the third is a lion in the middle, with an orb on its head showing the sacred initials of Christ the putti surrounding it are holding the crown and the sceptre of the Holy Roman Emperor, a papal tiara and the keys of St Peter. In the fourth are putti at play, with a peacock above them. A ring and three feathers (Medici emblems) appear on all pictures, on the meander frieze against a red background. 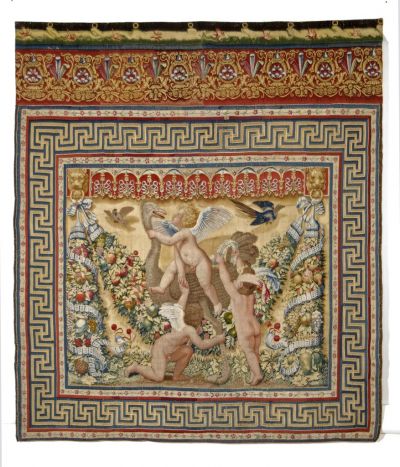