The oval table can be separated into two halves of identical structure. Each of the halves stands on a baluster leg with cannelures, which stems from a three pointed plinth. The two parts can be connected with iron screws.

This model was frequent between 1775 and 1830 it can be dated more exactly by the construction of the plinth: the earlier pieces had C-shaped legs, while the S-shape was preferred later. The legs of the later pieces are curved and splayed. 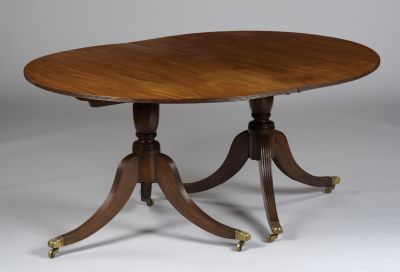