Archive / Collection of Designs and Drawings

This watercolor represents the so-called Gaignieres-Fonthill vase. It was made in 1713, when the Dauphin’s possessions were documented by François Roger de Gaignieres. The full documentation – including another copy of this watercolor and its description – is kept at the Bibliothéque Nationale (Bibliotheque nationale de France. Département des manuscrits. Français 20070). The Paris drawing was first published by F. Mazerolle in 1897, and in 1961, Arthur Lane identified the vase itself, which has been at the National Museum or Ireland (Dublin) since 1882. The name of the object comes from the collection of William Beckford: the mounted ewer was an important piece in his early 19th century collection assembled at Fonthill Abbey.

The object documented in the watercolor is generally regarded as the oldest well-documented Chinese porcelain vase which had entered Europe. Based on the studies of Mazerolle and Lane, the vase is usually connected to the court of Hungarian king Louis the Great. In fact, the vase had never been in Hungary, and its heraldic decoration refers not the Hungarian Angevin rulers, but to the Neapolitan Angevin dynasty. The silver-gilt mounting was most likely commissioned by Queen Johanna II of Naples (1414-1435). 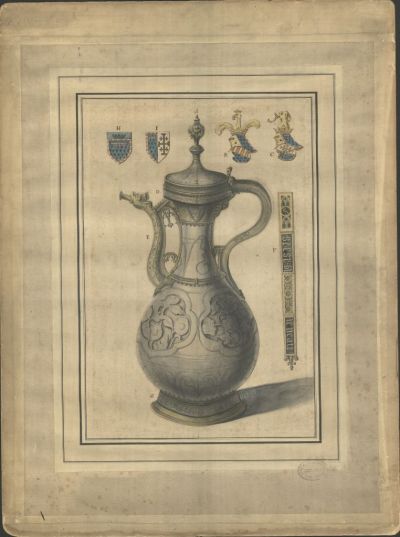