The large, slightly domed surface joins a vertical, splaying rim, which is pierced with rosettes in 3.5cm. The surface is decorated with small, grey motifs of Byzantine cross, enclosing the inscription MORIAMUR PRO REGE NOSTRO! in golden frame. The inscription is surmounted by the polychrome scene depicting Maria Theresa, who, holding the little Joseph in her arms gets the estates at the 1741 Pozsony parliament to vote the warfare tax. Maria Theresa is shown in the company of her ladies-in-honour the estates stand in special Hungarian clothes(atillas), with swords drawn out, and swear on being loyal to the queen. The dish is remarkable first of all for its technical merits. The surface is almost one meter in diameter, yet it has never buckled or warped and the pierced rim has not been damaged at all after firing. However, all these technical merits served the purpose of calling the attention to the scene depicted on the dish. It should be considered that the dish was made in 186l, right in the struggle for and against compromise between Hungary and Austria. A certain part of the Hungarians were already fed up with being continuously in opposition since 1848 and were searching for ways to make peace with the court the other part, however, were disgusted even of the thought of making a compromise. The symbol of the latter group was - and remained - the nod parliament, where the Bercsényis slaughtered the delegates of Turóc and Liptó counties, who were searching for peace and agreement. Those who would have liked to see the compromise also chose a symbol for themselves: the 1741 Pozsony parliament where the estates - as it is depicted in this dish - offered their lives and blood to their queen, Maria Theresa. Beside his love for porcelain, Fischer, the owner of the Herend factory, was deeply involved in the topical questions of politics. For example,, like all of his contemporaries, he wanted to know whether the worsening moral and financial crisis of Hungary would be halted by compromise or opposition with the royal court. Fischer used to be a devoted supporter of 1848. He applied the Kossuth- escutcheon on his factory and on his works even when it meant despisement or punishment instead of appreciation. However, in 1861-62 we do not see the former Fischer, who was ready to take up the Kossuth-escutcheon, but a man who already got tired of struggles and wanted to join those who wished compromise. The Vitam et sanguinem scene of his dish reflects his attitude. He thought he would be successful with the dish at the 1862 London exhibition but he was wrong: neither the technologically unique nature nor the definitely European tendency of the illustration attracted interest or directed the attention towards Herend. According to some - unproven - approach, Fischer brought the dish to London but did not dare to venture its introduction in front of foreign and Hungarian public due to the Almássy-Teleki conspiracy. The dish was painted in Herend in 1861, on the basis of V.H. Norden's lithography, which was made after Jospeh Hasslwander's painting. 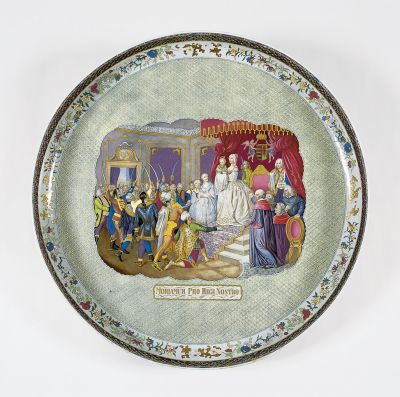