Fan - Emperor Leopold II, King of Hungary with his family

The etching shows Leopold II, the Holy Roman Emperor and his large family in a stage-like scene. The imperial couple is surrounded by their children, wearing no imperial emblems, corresponding to the image of an enlightened monarch. They stand in the middle of the podium enframed by a red curtain with a gold pattern. The curtain is drawn up and flanked by columns on the sides. On the two sides steps lead up to the podium, and the parapets beside the steps show the numbered lists of the persons appearing in the picture. The numbers are repeated beside the figures, so that they could easily be identified. Left parapet: 1. Seine Apost: Majestat Leopold II. / 2. Königin Majestät Maria Lauise (!) / 3. Erzherzog Franz Ioseph Erbprinz. / 4. Erzh: Ioseph Ferdinand. / 5. Erzherzogin Mariaanna. / 6. Erzh: Karl Ludwig. / 7. Erzh: Alexander Leopold. / 8. Erzh: Ios: Anton Iohann. Right parapet: 9. Erzherzogin Maria Clementina. / 10. Erzh: Anton Victor. /II. Erzhin Maria Amalia. / 12. Erz: Iohann Baptist. / 13. Erzh: Rainer Ioseph. / 14. Erzh: Ludwig Ioseph. / 15. Erzh: Ioh. Ios. Rainer Rudolph. The dress of the empress and the curve of the curtain are decorated with sequins sewn on the paper sheet. On the back side of the fan the Hungarian crown jewels, (that is: the crown, the apple, the sceptre and the sword) appear, placed over a red cushion on a table, they are guarded by two "hussar" soldiers, dressed in red uniforms, raising their swords to their shoulders. In the left corner, there are two faded, small stamps, the spokes are fastened with a long originally red, now faded silk string. Emperor Leopold II was crowned King of Hungary in Pozsony on 15th November, 1790. This represented a compromise between the ruler and the Hungarian noble orders. The fan was designed to popularize the Emperor and the imperial family, and was possibly made for the coronation ceremony. Another fan, following Adamschek’s etching, now in the Historisches Museum der Stadt Wien, shows Leopold II and his family in the garden (inv.no. 58.558). The similarity of the motifs suggests that the fan sheet described above was probably made by the same designer, G. Adamschek. The most famous work by the Hungarian-born Adamschek, who was working in Vienna, are the plates made for the book of Samuel Decsy: A magyar szent koronanak es az ahhoz tartozo targyaknak Historiaja (The History of the Holy Hungarian Crown and the Accompanying Objects), which was published in Vienna in 1792. 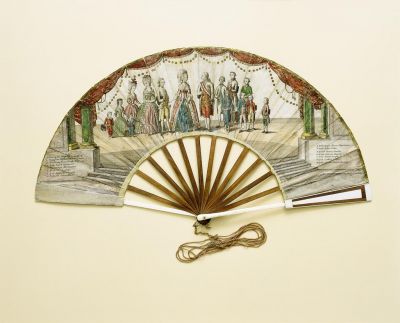