Crane, who was the intermediator of Pre-Raphaelite principles in Hungary, was also dealing with book art and designed several ex libris pieces. He worked during his stay in Hungary and one of his drawings, made for Geza Nikelszky, became the coverplate of Nikelszky's poetry volume published in 1904. He designed an ex libris for Elemer Czako, the librarian of the Budapest Museum of Applied Arts and also one with a Transylvanian gate for Janos Kovacs, a teacher at the English Department of the University in Kolozsvar, who accompanied Crane during his visit in Transylvania. He designed the coverplate of the October 21, 1900 issue of the «Új Idők» (New Age) magazine, which is identical with the ex libris of Kalman Rozsnyay. Rozsnyay had a great role in organizing Crane’s exhibition in Budapest. (We also have to mention that Crane asked Rozsnyay to draw the ex libris for his wife.)

The female figure in the picture holds a flower basket in her left and roses in her raised right, with butterflies, lilies and other flowers in the background. The symbols of Christian art become rather secular in tum-of-the-century female figures with flowers. There is no shading, Crane prefers strict contours, just like in his theoretical studies where he always stresses the strength and decorative effect of lines. 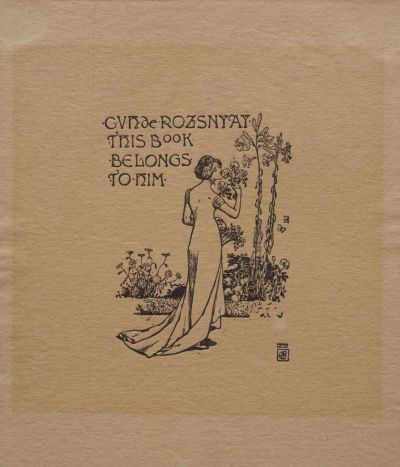