The cylindrical box has a round, domed cover. The rim of the casket and the cover are set in a bronze band, which is enriched with leaf frieze. The casket opens on hinges at the back and can be closed by a palmet clasp at the front. The body is painted with the allegories of music, happiness, painting, sculpting and science, with groups of cupids and female figures, and a lot of attributes. The cover is decorated with the lying figure of Venus, in a triple framework of flower rosettes and geometrical motifs. She is lying among cupids who arrange her clothes and hair. There is a quiver with arrows at her feet, and a kissing dove couple in the sky.

The relief surface and the shaded, drawing-like painting, together with the use of bright colours follow the decoration of the so-called mezzo rilievo porcelain, manufactured in Capo di Monte (Naples), around 1740. However, the members of the depicted group and the colouring of the sky and the clouds suggest that it is not more than a natural but banal imitation of the Italian model. The inside of the surprisingly large box is painted with scattered, polychrome, Meissen-style flowers over-glaze. The marking is fairly similar to the ones used by the Ginori factory (Doccia) between 1818 and 1835 and after 1850, which was dealing with the restoration of Capo di Monte products. Yet the casket is more likely to have been made in the Thuringian factory, and the marking, which is almost identical with another famous one, was used for imitation purposes. 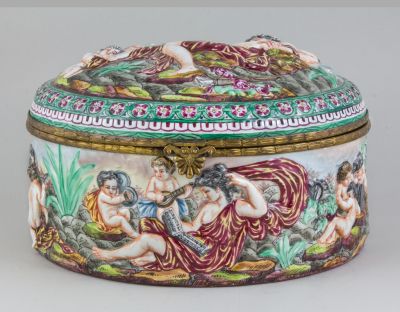